Madeline Holly “Maddie” Fenton, born as Madeline Payne, is a Character in 5 Years Later. She first appeared in Chapter 1: Alienated. She is the mother of Danny and Jazz Fenton.

Maddie has shoulder-length auburn hair, deep red lipstick, and violet eyes. She usually is always seen wearing a blue rubber jumpsuit, along with black rubber gloves and boots. Her suit also has a belt, which has a pouch for her equipment, and a rubber hood, which she usually wears, along with a pair of black lab goggles with red lenses. 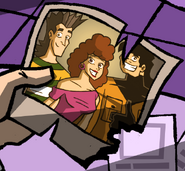 Maddie is a firm believer in what can be strongly evidenced or scientifically “proven” (in the Danny Phantom universe, that includes ghosts) and is more rational than her husband, who is now an alcoholic. She is very protective of her family, which she loves very much, defending Jack whenever Vlad speaks ill of him.

While she has shown to be overly enthusiastic with Ghosts like her husband, Maddie has shown she can restrain herself better.

Prior to 5 Years Later, Maddie was a ghost hunter along with her husband, Jack Fenton. Not much of Maddie's past is revealed outside of her college days, where she was friends with Vlad Masters and Jack. The three worked on a Porto-Ghost Portal that backfired and resulted in Vlad getting Ecto-Acne. Afterwards, Jack married Maddie and they had two children: Jazz and Danny Fenton.