"You're only as good as the hero you think you are."
―Chapter 7: Fold

Magistratus Max Tennyson' is a character in 5 Years Later from the Ben 10 Universe. He is a founding member of Ben's Team and Magistratus of the Plumbers.

Max Tennyson is an aged male human with grey hair, brown eyes, and a bushy beard. He wears a red shirt with yellow floral designs on it. He also wears a brown and white cap, which has since been damaged in the Limax War. 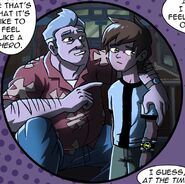 Max is very caring for his grandchildren and is usually the source of their moral support and advice.