5 Years later Wiki
Register
Don't have an account?
Sign In
Advertisement
in: And Beyond, Aliens, Ben 10 Universe,
and 3 more

Methanosians are a species from the planet Methanos in 5 Years Later.

Methanosians are bipedal plant-like creatures whose height normally varies from 6 to 9 feet tall. Methanosians come in an array of colors, petal patterns, and abilities.

When born, Methanosians start out in their Pod Form. In this form, they resemble a seed with a long prehensile stem.

As they grow, and begin to feed on other sources, outside of their own chlorophyll, they more than double in size and mass, and grow into their Budding Form, in which their seeds darken and start to sprout.

As they continue this process, they quickly enter their Bloomed Form, becoming an additional 75% larger, with their seed and sprouts fully bloomed, and their methane pores fully opened and ignited at all times.

Towards the end of their life cycles, the roots and vines that make up their bodies will start to harden and become stiff, like wood. They become far slower when they reach this state.

Methanosians are a species native to the planet Methanos. Methanosians evolved from various carnivorous plants found commonly around the planet, and are one of the two intelligent species that are from the planet, with the other being the Xolbrine.

Methanosians are hunters, feeding on the various less fortunate flora found on the planet, as they contain Ziellphyll, as the more Ziellphyll they consume, the faster they will grow, and despite the smell, it is apparently delicious. Methanosians, in particular, crave a large round fruit filled to the brim with Ziellphyll called Ziel Fruit. They are exceedingly rare, but when found, Methanosians are generally so thrilled when one is found, that they often consume one in a single bite.

Instead of building homes, Methanosians will use their pyro abilities to make clearings in the forests. Then, they will root themselves for the night so they can absorb as much direct sunlight as possible when the sun rises. 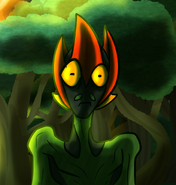