MonKi is the Omnitrix's DNA sample of a Saiyan from the planet Vegeta in the Andromeda Galaxy in 5 Years Later.

MonKi in his Base Form is a muscular humanoid transformation with a striped green, white and black costume. He has large, blocky hair, accompanied by a beard. He also has green eyes and a tail that resembles a monkey's tail.

In his Super Form, MonKi becomes more feral and ape-like, with golden fur and skin. His hair extends even further, down to his knees and changes from black to a bright yellow, with a streak of blue. His facial hair becomes orange and slightly longer. He wears black, white, and green pants. The Omnitrix symbol is now located on his waist. 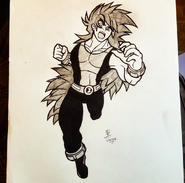 Saiyans are the descendants of Kryptonians from the failed colony of Sadala. After encountering and begging a group of Dragons for a new home, the Dragons brought them to their neighboring planet of Vegeta. Here, they evolved and became more attuned with nature. They learned how to control and manipulate Ki, an energy source found in all living things. With this they lived in harmony alongside the Tuffle and Dragons.