Alex Gautreaux (Suit)
Kuro the Artist (True Form)
NRG is the Omnitrix's DNA sample of a Prypiatosian-B from the planet Prypiatos in the Andromeda Galaxy in 5 Years Later.

NRG is a humanoid alien. His radioactive body has skeleton-like qualities with trails of loose energy. He has silver wrist gauntlets and black shorts for his uniform. To protect surrounding lifeforms, he wears a containment suit.

When absorbing enough energy, his body becomes very muscular, and grows more organic features like a nose, fingers, and a tail. 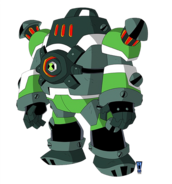 Some citizens moved to underground to avoid further genetic damage. Others that chose to stay on the surface thrived in the wake, absorbing more and more concentrated radiation, resulting in mutations. With their new forms they have become dependent on nuclear energy, their bodies now run on it. These Prypiatosians became the Prypiatosian-B subspecies.[1]