Nanomech is the Omnitrix's DNA sample of a one of a kind half Human, Half Nanochip hybrid in 5 Years Later.

Nanomech is an incredibly small, robotic transformation with both humanoid and insectoid-like qualities. He has a silver and dark gray outer metal shell with green ridges going along his chest to his shoulders and on his waist. He has five eyes with a long black neck. He has three arms attached to his main body with silver tubes, which are connecting his waist with his upper body as well. His arms have two claw-like digits, and the wrists have green circuitry along the sides. He has three spider-like legs. 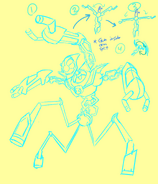