Night-Owl is a tall, owl-like alien with black feathers that act as a cloak around his body. He has two large white feathers protruding from his head that act like eyebrows. 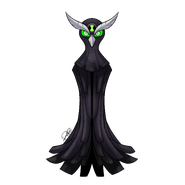 Tenibis, its moon, and its sun are surrounded by a cosmic storm, not unlike the ones To'kustars are born in, this has led to the only ones able to exit and enter the planet being its residents, the Tenibisians, as well as anyone/anything they want to bring with them.

This has led to the Tenibisians hoarding their knowledge, only sharing it with those they deemed “worthy”. One such being was Azmuth of The Galvan. The Galvan declined, as he claimed, “There isn’t anything I can learn from you that I can’t learn for myself.”

Azmuth instead offered to sample their DNA for his, at the time, prototype device: The Omnitrix. The Tenibisians agreed, and have never requested Azmuth’s presence on their planet since, whether because of respect for his ambition, or because they were insulted by his declination is still unknown.