Kuro the Artist
O.R.Ash
Ultimate Heatblast is the Ultimatrix DNA sample of an evolved Pyronite.

Ultimate Heatblast has a body that is much more larger and bulky than his default form, with molten rock spikes that are sticking from his chest over his shoulders. His head no longer is engulfed in flames, instead being totally encased in hot plasma. He losses his uniform, and his legs turned to melting plasma. His face has changed in structure and gained two horns.

The Ultimatrix symbol is located on his 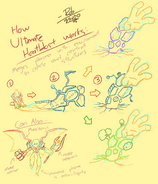 Kuro the Artist
Ultimate Echo Echo is the Ultimatrix DNA sample of an evolved Sonorosian.

Ultimate Echo Echo is a tall, lean humanoid transformation with a blue containment suit that makes him appear as robotic with black stripes and details. He has many sonic disks across his body that he can remove.

Ultimate XLR8 is the Ultimatrix DNA sample of an evolved Kineceleran.

Ultimate XLR8 is a humanoid velociraptor with blue skin. He is covered in segmented grey and black plating with green nodes. His pointy helmet is primarily black with a green stripe along the top. Ultimate XLR8's face has a snout the just outside the helmet, with two black lines going over the eyes.

Ultimate XLR8's arms and legs are covered in a black uniform with a line that reveals their skin. Ultimate XLR8's limbs have 3 clawed digits at the end, his feet standing on white roller balls. The elbows and thighs have green rocket-like protrusions.

The Ultimatrix symbol is located on the chest.