I ended up somewhere I later came to know as the Null Void. It was creepy, and that's coming from me.Danny Fenton

Null Void is an alternate dimension which was discovered by the Galvans long before events of 5 Years Later.

The Null Void is an alternate dimension that was discovered by the Galvans and used as a penal colony for dangerous prisoners. Many of the criminals that were sent to the Void chose to start new lives there. But the influx of new criminals made it a very dangerous place to live. The Galvan chose to help by creating the Null Guardians, creatures that take care for the criminals that are causing trouble for the locals. Overtime, the Null Void has become less and less organized and at this point has become an anarchy where the strong survive.

It's where we used to keep intergalactic criminals. Now it's more like an anarchy. It's kinda awesome.Ben Tennyson

The Null Void is a space-like dimension, filled with asteroids and islands aimlessly floating through the void. The Void's landscape is constantly changing, making it impossible to know where your going. Over time, the Plumbers began to establish colonies that functioned as prisons.

The 5 Years Later wiki has a collection of images and media related to Null Void. 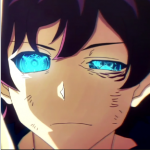