OnionHead is the Omnitrix's DNA sample of an Onyon from the planet Nogrog in the Andromeda Galaxy in 5 Years Later.

OnionHead is a small Onion-Like alien. He has three crab-like feet on either side and behind his body, and large stalks sprouting from the top of his head. He wears a black suit on his mouth with green and white details.

The Omnitrix symbol is located on his face. 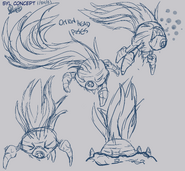 Nogrog was visited by the Eradicators; and, deemed to be a threat to the Kryptonian hierarchy, was promptly attacked.