Outburst is the Omnitrix's DNA sample of a Destructoid from the planet Splosinia in 5 Years Later.

Outburst is a humanoid transformation in a black containment suit with a green upper torso. Inside his containment suit, is an orange, liquid biofuel that dissipates at the top of his head like fire. He has two arms with four white fingers that can fold back to resemble a cannon. 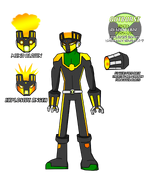 Splosinia is enriched with a material that has an atomic structure similar to that of plastic and has underground veins of fuel with similar properties to nitroglycerin. A species that would later be known as Destructoids, are comprised of this fuel and, overtime, gained sentience.

Their unstable atomic structure resulted in several mutations, that caused them to lose control of their ability to ignite their biofuel. Overtime, they learned how to create containment suits made from the plastic-like material of their planet, to shield themselves and stabilize their abilities. After mastering their craft, they learned to upgrade their containment suits further by creating specialized gauntlets that serve as cannons, using their biofuel as ammunition.

Currently, the Destructoids continue to improve their suits and have specialized in planetary defense technology, as well as specializing in demolitions and making custom firework. 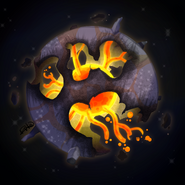