Pesky Dust is the Omnitrix's DNA sample of a Nemuina from Nemunimos IV in 5 Years Later.

Pesky Dust is a small, fairy-like alien with cyan skin, yellow wings which have four segments, he has two large light-green eyes, he has also purple marks on his chin and around his eyes, his hair is blue with a green spot in front, Pesky Dust does not have a mouth. Pesky Dust has a "dress" like uniform with a white Gloves and top uniform separated by green from the openings of clothes and the black bottom of the costume, the bottom of the costume has a green spiky pattern surrounding his waist, the very bottom the opening is white with green hexagons on each of the sides. 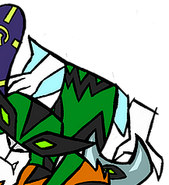 Pesky Dust in Flashback of Chapter 2: The Lonely Ghost