Phil Gacks is a character in 5 Years Later. He first appeared in Chapter 8: Risen. The son of Bill Gacks, Phillip “Phil” Gacks is a member of the Plumbers, appointed the janitor of the Plumber Base in the Orion-Cygnus District.

Phil is a small Caucasian male with a scar on his right cheek. He has long brown hair and a beard. He wears a maroon beanie with a maroon, brown, and olive green janitor shirt and pants. 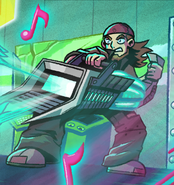 Phil is a bit of a burnout. He's a very laid back and go lucky type of guy. Even though he doesn't have the greatest job in the world, he does take pride in the work that he does for the Plumbers.