Plumber Ships are ships commonly used by Plumbers as forms of transportation, especially when it comes to spatial travel.

Plumber ships vary in appearance, but the one seen in Chapter 5 has a circular cockpit with two large wings and a large engine in the back. It has a color scheme of gray, green, and white.

Upgrade merged with the Plumbers Ship 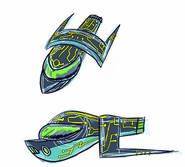