Portaler is a bulky, armored beetle/turtle-like humanoid with light green skin. He has a red armored shell on his back and tail, with a black stripe going down the middle. He has yellow plating on his arms, lower leg, and stomach, with a red core in the center of his belly. He has yellow spheres on his ears and tail. He wears a black covering over his head and his midsection. 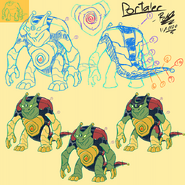