Professor Paradox is a hero in 5 Years Later. He first appeared in Chapter 9: Time Out. He is a Human from the planet Earth in the Ben 10 Universe.

Professor Paradox resembles a Caucasian man in his late 40s. He wears a torn shirt and a brown vest, along with black trousers. He is equipped with a golden cane and a pair of green goggles. He has a holographic arm for his right arm projecting from a pocket watch attached to him with his neck tie. 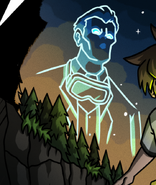 Paradox is an easy-going and intelligent man due to the millennia he's spent traveling across the Multiverse. He is incredibly calm, remaining level-headed even in the most extreme and dangerous of circumstances. His enigmatic nature makes him unpredictable to others and often hard to understand.

The 5 Years Later wiki has a collection of images and media related to Professor Paradox.
Community content is available under CC-BY-SA unless otherwise noted.
Advertisement