Chapter 1: Alienated
The Proto-Tool is a multi-function weapon used by Rook Blonko in 5 Years Later.

The Proto-Tool is a blocky, black and white device with orange circuitry and energy. With the Intergalactic Peace symbol in the front and back. 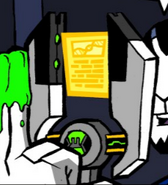