Ripcord is the Omnitrix's DNA sample of an Averta Minor from the planet Diosphear in 5 Years Later.

Ripcord is a barrel-like alien with blue skin that fades to red. His cheeks are puffed out. He has three tendrils covering his mouth and two fins on the side of his head. A light green ring segments his head, torso and his base. He has three arms with seven fins coming out of each arm. He wears a black uniform with green sleeves.

The Omnitrix symbol is located on the top of his head. 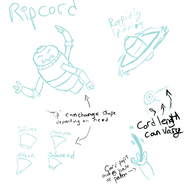 The planet Diosphear was hit by a large moon resulting in half the planet being destroyed. The destroyed fragments orbited the planet creating an asteroid belt that could still maintain life. The Averta Minors were ones of the living beings on in the asteroid belt. After being exposed to their planet's core for long periods, they developed a planet-like core in their bodies that allows them to manipulate their gravity. With it, they can maneuver through their new distorted gravity. They can also develop a gel-like substance in their palms that they can use to grapple onto asteroids.