Ripjaws is an Angler fish-like creature with a humanoid body. His fins across his face resemble human hair. He has a powerful jaw with razor-sharp teeth. He has two water tanks that cover his gills, allowing him to survive on land. When entering water, his extra skin morphs into a tail, allowing him to swim faster. His clothing takes the form of a swimsuit. 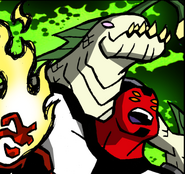 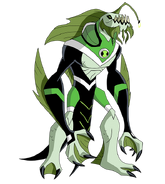