"Wow dude, seriously? You know that I can handle myself even without the 'glowing green eyes', right?"
―Sam Manson[src]

Sam Manson is a Character in 5 Years Later. She first appeared in Chapter 1: Alienated. She is a human from the planet Earth in the Danny Phantom Universe and the fiancé of Danny Fenton. 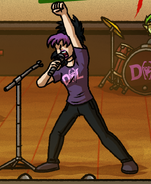 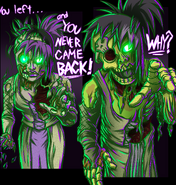 Her personality is less dreary than the stereotypical “goth” persona that is usually shown. She can be bossy, passionate, strong-willed, but also good-hearted. Based on how Sam conducts herself, it would be more fair to say that she labels herself a goth more as an outlet for her independence and individuality than as an embrace of how the stereotypical goth is presumed to behave-as such; she is often livid over the wider range of popular materials. She's rational, sometimes sarcastic, forceful, and level-headed, but in the end she has a caring heart.