Scraptile is the Omnitrix's DNA sample of a Mineragon from the planet Ferron in 5 Years Later.

Scraptile is a muscular anthropomorphic lizard alien with a white mane. His scale color is brown and a light brown abdomen. Scraptile has a long brown tail with the light brown on the bottom. He wears a black suit with white stripes and armor that covers his entire body with green stripes. 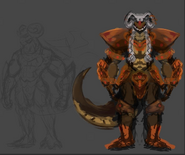 Mineragons are but one of the many reptilian races on the planet of Ferron, though they are arguably the most dominant. They don’t set themselves apart in culture from the rest of the population, and like the rest, they follow their King with utmost devotion and respect.

Due to their inherent powers of manipulating metals and minerals, they are renowned across their Solar System as excellent craftsmen. However, they reject modern technology and try to live their lives like their ancestors did.

Those that don’t devote themselves to the art of crafting and forging instead make a name for themselves in combat. Their inherent ferromancing abilities, durability, strength, and know-how with the makeup of several weapons and armors makes them excellent soldiers and tacticians. Mineragons are sturdy and stubborn, and mostly very straight forward. They aren’t good with sarcasm and can easily get offended.

Aside from their king, most Mineragons, like the rest of the Ferronian population, worship the 4 guardian beasts of Ferron, giant behemoths each claiming dominion over one of the planet's main areas. A desert to the west, an icy tundra to the north, a large mountain range to the east and an all-encompassing Ocean, with a large coral reef to the south. Mineragons are able to crossbreed with the other sapient reptilian races on Ferron, creating a very colorful population with a deeply intertwined culture built upon mutual respect and acceptance.