Shocksquatch is an apelike alien. His head is hunched over his shoulders, and his arms dangle down to his feet. His hands and feet are rather large. He has pinkish skin covered in pale yellow, blue-gray, and dark gray hair with black highlights and lightning bolt-like markings. 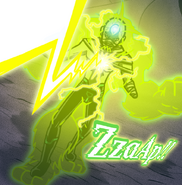