Slampeed is the Omnitrix's DNA sample of a Pulsoar from the planet Luas Tapa in 5 Years Later.

Slampeed is a rhino-like humanoid alien. He has gray skin, green eyes, two horns on the back of his head, and a partial green exoskeleton protruding from his head. He wears a black and green bodysuit.

The Omnitrix symbol is located on his left forearm. 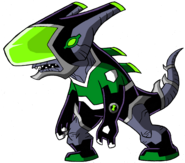