Slingshot is a blue humanoid alien with blue skin, three green eyes, and tentacles that can split apart. He is wearing a green, black, and white shirt with green underwear. Slingshot also has two green sleeves on the bottom of his legs.

The Omnitrix symbol is located on his right leg. 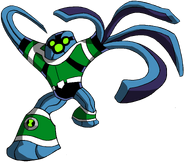