Soarnitho is a humanoid bird alien with blue fur, and a pair of huge, white, moth-like wings on his back. He has two pairs of black, double-jointed arms tipped with three claws, and similarly double-jointed legs. He has a green patch of fur underneath his arms, and a pair of horns that curve around his eyes and beak, before jutting from his head, with the left horn slightly longer than the right.

When using his powers, Soarnitho's eyes go from green to a luminous pink. 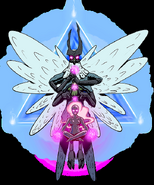 The Ithibis are Guardians of Ledgerdomain and naturally produce an excessive amount of Mana. As a result, they can quickly become highly adept magic users.

The 5 Years Later wiki has a collection of images and media related to Soarnitho.
Community content is available under CC-BY-SA unless otherwise noted.
Advertisement