Solar Bear is the Omnitrix's DNA sample of an Ursidian from the planet Polorpus in the Andromeda Galaxy in 5 Years Later.

Solar Bear is a large, humanoid polar bear-like alien with four green eyes. He is around six feet tall, and his posture is quite slouched. He has hard, solar-panel-like flesh on his shoulders, belly, and thighs.

When he has absorbed enough solar energy, he will start to glow; regular Ursidians glow a light blue color, but Solar Bear glows Omnitrix green. 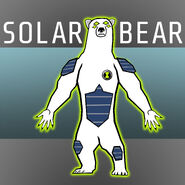 Polorpus resides in a solar system with an unstable sun, because of this, solar flares and solar storms are regular occurrences. Ursidians thrive in this kind of environment.