Spidermonkey is the Omnitrix's DNA sample of Arachnichimp from the planet Aranhaschimmia in 5 Years Later.

Spidermonkey is a blue primate-like alien with six eyes, four arms, two legs, two striped tails, and three fingers on each hand. Certain parts of Spidermonkey's body are not covered in fur, such as his: upper arms, face, chest, fingers, and feet. Spidermonkey wears a black bodysuit with a green pattern with white stripes coming to the Omnitrix and green and black gloves. 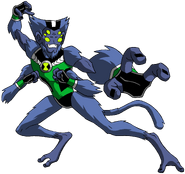