Stinkfly has an insect-like body with a green exoskeleton. He wears a green, black, and white bodysuit covering his torso and tail. Stinkfly has two insect wings, four legs, two arms, and four eyes.

The Omnitrix symbol is located on his thorax. 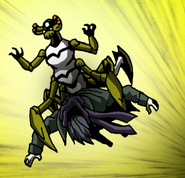 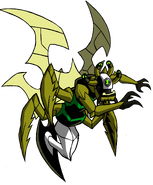 Retrieved from "https://5yl.fandom.com/wiki/Stinkfly?oldid=23312"
Community content is available under CC-BY-SA unless otherwise noted.