TailPorter is the Omnitrix's DNA sample of a Tachyvulimpus from an accretion disc of a black hole called SNC-37949 located in the Andromeda Galaxy in 5 Years Later.

TailPorter resembles a small foxlike impish creature with a relatively long tail and large ears. He has orange fur with darker red stripes that have a swirling pattern. He has two small horns on his head, with four spikes near the end of his tail.

The Omnitrix symbol is located on his stomach. 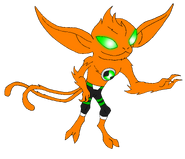 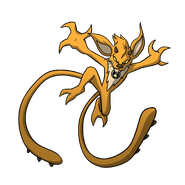 It is theorized that their original home planet was consumed by the Roche limit of the black hole. Living in the accretion disc with objects orbiting at incredibly fast relativistic speeds caused the Tachyvulimpus to evolve to sense oncoming danger allowing them to teleport out of the way of incoming objects and projectiles. The Tachyvulimpus are also quite incautious due to them constantly ramming into asteroids with no regards for potential collateral damage.