TailSpin is the Omnitrix's DNA sample of a Bushala Boorata from the planet Klyplon in the Andromeda Galaxy in 5 Years Later.

TailSpin has a long worm-like body. His eyestalk is orange, veiny, and has three eyes. His body is covered in fur with the lower half colored orange with black stripes on the sides and the upper half colored in a light orange. His mouth is at the end of his body with a yellow veiny texture underneath the mouth points. His tongue is pink that fades into yellow on the sides.

The Omnitrix symbol is located on a black and white brace around his torso. 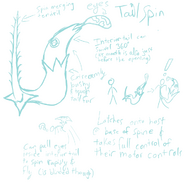 They defend themselves from their predator, the Kallons, by connecting to their backs and attack the other Kallons.