"That Multiverse is quite the trip! Now check this out!"
―Technus[src]

Nicolai Technus 9.0, usually referred to as just Technus, is a villain in 5 Years Later. He first appeared in Chapter 4: The Fallen Gods. He is a Ghost from the Ghost Zone in the Danny Phantom Universe. Before joining the Alliance, he was a recurring foe of Danny Phantom.

Technus is a ghost with green skin and white hair. He wears a pair of dark glasses and a silver cape. He has a mullet and a goatee. He wears a long black coat with yellow stripes and a glove with various circuits on his left hand. 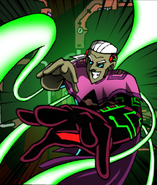 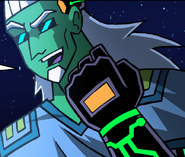 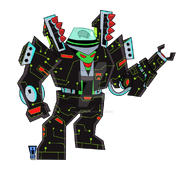 Technus being fused with all the Alternatives Ben

"Yeah, I don't think so. You still haven't told us anything actually worth something to me. You think I'm just gonna stay in this lab and let you-!"
―Technus[src]

Although a genius in his own right, Technus is very egotistical, with a habit to shout out his plans to his enemies before he has a chance to finish them. He uses outdated slang, such as “peace-out.” He is incredibly arrogant, arguing with both Eon and Aloysius Animo, believing himself to be better than both of them, and irritating Vlad Plasmius, who attempts to simply avoid him. He often demands to know what Eon's master plan is, being uncomfortable not knowing his goal. It has been stated that he hates emotions.

Technus was one of Danny's earliest foes. Danny first met him when he inadvertently caused the Fenton Portal to open up, releasing Technus momentarily. The two battled throughout Amity Park as Technus used his Ghost Powers to build a gigantic robotic body out of Fenton Works technology.

A few months later Technus returned to Amity Park where he became fascinated with one of Danny's video games. He traveled into the game in an attempt to take control over the internet. Danny and his friends found away to trap him in the game however but using a glitch to trap Technus in a softlock. Technus later escaped Danny's computer after Danny deleted his old copy of the video game. Danny followed Technus to an electronics store where he upgraded his body to Technus 2.0. After another huge battle across the city Technus was defeated by Danny and locked back into the Ghost Zone.

Much later on, Technus caused havoc in the Amity Park Mall until he slips away while Danny is busy hiding his identity from the onlookers, though he lingers long enough to spy on Danny's interactions with Valerie Gray to recognize their potential for romance... and therefore an opportunity to keep his opponent busy. He played match-maker with them to give him time to work on cracking a ten-thousand digit access code within a master computer in Axion Labs to gain control of a satellite computer in orbit that would in turn give him total control over the Internet. Even when Danny got close to discovering his scheme, Technus sent other obstacles his way, such as remotely hacking Valerie's original ghost-hunting battle suit, then going so far as to endowing her with an entirely new and improved battle suit to fight Danny in his Phantom persona, subtly predicting she would take an opportunity for revenge over reason. Despite all this, Danny defeated Technus once again before he could cause any lasting damage to the world.

While Vlad Masters was beginning his Disasteroid operation, Technus robbed an electronics store for extra parts. When confronted by Danny, he combines them with a nearby car to create the "Car-Puter", a battle suit too powerful for Danny to defeat by himself. Only Vlad's new team of ghost hunters the Master's Blasters were able to destroy his suit and capture him. Later on he appeared alongside all the other ghosts when Danny brought them all to Earth to help turn it intangible so the Disasteroid would not annihilate the planet- and by extension the Ghost Zone, both realms being the flipside of each other.