UltraViolent is the Omnitrix's DNA sample of a Laceritter from the planet Spectropica in 5 Years Later.

UltraViolent is a large purple humanoid figure with large, sharp shield-like plates for arms. He has four eyes that are placed all over his head. He has areas on his legs, sides, neck, and arms that glow green. 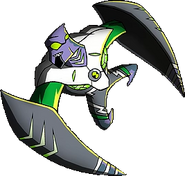