Kuro the Artist
Upgrade is the Omnitrix's DNA sample of a Galvanic Mechamorph from the moon Galvan B in 5 Years Later.

Upgrade has a humanoid shape covered in shiny green metal. Selective parts, including his head and back, are covered in a deep, reflective purple. There is glowing green circuitry patterns over the purple sections. His one eye is detailed with a circut-like pupal, with no other facial features.

The Omnitrix symbol is located on his left wrist. 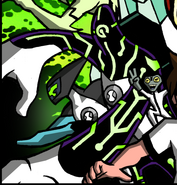