Visipede is a centipede-like insectoid with the lower body appearing similar to a centipede with ten legs and two stingers, but he has the upper body of a vaguely humanoid ant with six arms, the upper two being larger than the rest. He has a visor that wraps around their head in a complete 360-degree arc. Their exoskeleton is various shades of red.

The Omnitrix symbol is located on his upper chest. 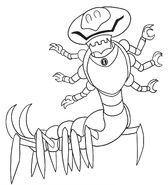