"...I never stopped pushing. I never broke. And as it turns out, we have no limits."
―Vlad Masters to Danny Fenton[src]

Vladimir Silver Masters also known as Vlad Masters, or Vlad Plasmius is a Villain in 5 Years Later. He first appeared in Chapter 1: Alienated. He is a Half-Human/Half-Ghost from the planet Earth in the Danny Phantom Universe.

In Human Form, due to a result of being infused with the ecto-acne, Vlad has had grey hair since the age of 22, and typically keeps it long. His eyes were blue but had turned black, with a thick outline around them, in both human and ghost form. He wears a black suit with a red handkerchief in his left breast pocket, and a matching red bolo tie.

In his Ghost Form, Vlad seems to resemble a vampire. Vlad is much more muscular and has sky-blue skin with pointed fangs. His eyes turn a glowing red, with no pupils. His hair is wild and tall, and now black with a silver stripe in the middle. He also has a black goatee. He wears a white uniform with black gloves and boots, and golden buttons and belt buckle. Lastly, he has high collar cape connected around his neck that is white on the outside and red on the inside.

In his Upgraded Suit, thanks to Technus, Vlad wears a muted-brick red, black, and white bodysuit. He has black and golden boots and gloves. His gloves sport a small red triangle on them. He also has a black belt with a golden letter 'V'. On his suit, there is a white stripe which comes up from his abdomen to his shoulders, forming a red 'V' across his chest. The 'V' turns purple when his Ecto-Cape is activated.

After Awakening, Vlad's appearance less resembles a vampire, and now resembles a demon. He now has longer and darker hair, with reddish brown spikes protruding from his elbows, knees and heels. He also has hair growing from his shoulder blades and collar bone, mimicking the shape of his old cape. He has a reddish-brown exposed-skull, with two horns and glowing red eyes. He has blue skin, with black skin from his upper torso down to his feet. He has a yellowish-white and red spot on his chest and stomach.

After consuming dark matter, Vlad evolved once more into Stage II. He now has additional spikes on his arms, with spikes now protruding from his shoulders. He has brown hair now growing from only his shoulder blades and his fingers have now become brown claws. The remaining blue from his body in his original Awakened form, has now faded, making his body almost completely black with only his lower jawline and ears remaining blue. The patterns on his chest and stomach have also changed. 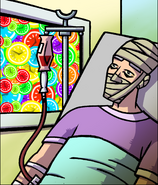 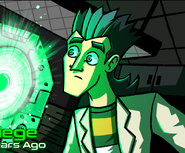 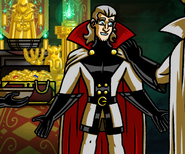 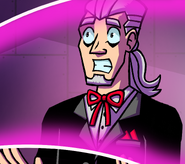 "If you really think I'm some one-track-minded fool solely driven by villainy, you have a lot to learn about me."
―Vlad Plasmius[src]

When Vlad returned from space, he seemed to be fed up with life. It seemed he didn't want to fight or join anyone, and just wanted to live his life as he did. All of this changed after he obtained his youth and strength once more. His will to live was replenished, and he immediately seemed to be much more villainous.

"Vlad told me that he spent years perfecting his powers while I was retired. If he can do things like this..."
―Danny Fenton[src]

Vlad used to be lab partners with Jack and Maddie Fenton when he was 22 years old. One day Jack tested his Ghost Portal right in front of Vlad's face. The resulting blast of Ecto-Energy infected Vlad with Ecto-acne, and infused his DNA with ghost DNA, turning him into a Half-Human/Half-Ghost. Vlad hated Jack Fenton ever since the accident.

Unlike Danny, Vlad's first outfit wasn't just an altered version of what he was wearing during his accident. Vlad's first outfit was given to him by a Ghostly Warlock during Vlad's early ventures to the Ghost Zone after first obtaining his powers. The outfit is a high-ranking uniform worn long ago by a secret society of monks that would worship spirits in hopes of obtaining magical abilities. The tribe has been extinct for at least a century (maybe more), with a good chunk of its members currently residing in the Ghost Zone. Vlad came across the cult and trained with them for years, learning about his powers and the culture of the Ghost Zone. After "graduating" from learning the ways of the spirit worshipers, he was awarded these garbs to show his acceptance as one of them. But he was soon banished from ever returning to the part of the Ghost Zone where the Warlocks reside after word got out of Vlad's criminal actions over in the Human world. Vlad still thinks about his years of training with the Warlocks, and how peculiar their name was... The Eyes of Sojourn.

After the Disasteroid crisis, Vlad was hurtled into the void of space. Vlad survived because he was a Halfa, something neither he or Danny knew at the time would give them resistance to the Disasteroid. The Disasteroid kept pushing Vlad deep into space, where he was lost and isolated, aimlessly floating around trying to find his way home, slowly mastering his powers during the time.

In the third Episode of And Beyond, Horas mentions Vlad's backstory and his relationship with Jack and his family.

The 5 Years Later wiki has a collection of images and media related to Vlad Masters.
Community content is available under CC-BY-SA unless otherwise noted.
Advertisement