Walkatrout is a blue, bipedal, fish-like alien. His body shape is mostly round with tiny arms and legs. He has a large dorsal fin on the tip of his head and a tail fin on the end. He wears a black jumpsuit and green boots with fins on the back of them.

The Omnitrix symbol is located on the left side of his tail fin. 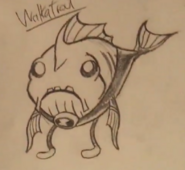