"Mutant To’Kustar. Our world was invaded using these beasts, so we sent them here in the Null Void to contain them."
―Rook Blonko[src]

Way Bads are genetically engineered To’Kustars created by the Incursean Empire. After a failed attempt to conquer Earth, the species was banished to the Null Void. One Way Bad debuted in Chapter 1: Alienated.

Way Bads are colossal purple and gray aliens with white bone and red marking. They vary widely in appearances. The Way Bad featured in Chapter 1 has a larger right arm, a jaw that is always opened, and red claws on its right arm, with gray fingers on his left. It has white bone protruding from his crest, shoulders, elbows, and it's calves. Its skin is a hard callus armor turned purple from old age. 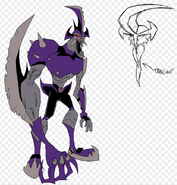 Way Bads lack much of a personality. The Way Bads are highly susceptible to mind control, relying on commands to act coherently. If they are not under the control of someone, they become primal beasts, acting out of aggression and basic necessity.