Way Big is the Omnitrix's DNA sample of a To'kustar from Cosmic Storms in 5 Years Later.

Way Big is a colossal white humanoid alien. He has a red frill on his head, and on his arms and shoulders his skin hardens into crimson armor. He has two massive green eyes and two small ones. As for his size, he regularly stands at 296.4 feet tall, but if the Omnitrix were to be low on energy, his size could change. 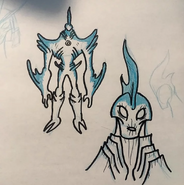 Concept Art by Kuro the Artist

To'kustars are born in Cosmic Storms, they look like gigantic storm clouds with an electrical storm swirling in the middle. In the center, eventually, would form a white liquid-ish sphere. And over time, it would form humanoid characteristics and a face. As it gets older, its skin starts to harden, and peel. They use their peeling skin like armor.