Whampire is the Omnitrix's DNA sample of a Vladat from the planet Anur Vladias in the Anur System in 5 Years Later.

Whampire is bat-like with a green and black cowl that covers his eyes and chin. He wears a white, green, and black jumpsuit. Whampire has pale white skin and black wings extending from his arms. He has grey fur growing around his neck.

The Omnitrix symbol is on his left pectoral. 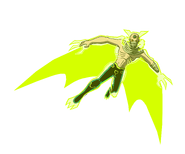 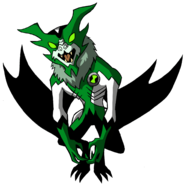