Wildmutt is the Omnitrix's DNA sample of a Vulpimancer from the planet Vulpin in 5 Years Later.

Wildmutt is an alien with an animalistic and dog-like body. He has no eyes, orange fur, and gills on the sides of his neck. He has a long orange tail with darker stripes at the end of it. Wildmutt wears a green, black, and white horned helm on his head and a matching saddle on his back. He also has wrappings around his wrists.

The Omnitrix symbol is located on the top of his helm. 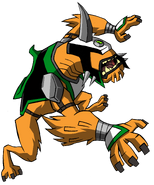