Wildvine is the Omnitrix's DNA Sample of a Florauna from planet Flors Verdance in 5 Years Later.

Wildvine resembles a Venus flytrap that was pulled from the ground, roots and all. Aside from his singular-eyed head and large collar of teeth, his body is made up entirely of green and brownish-green vines and roots. He has six exposed seeds hanging from his back. He has two blue orbs on each shoulder. He wears a uniform that is present on his chest and on his “arms”, allowing some of his vines to form thumbless, three-fingered hands. 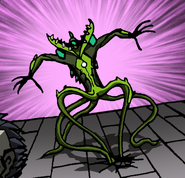