WindWeed is a humanoid living tumbleweed with several wind tunnels spinning around his limbs, The small branches on the outside of the arms work as their fingers, he also wears big, round goggles.

The Omnitrix is located on his air stabilizer. 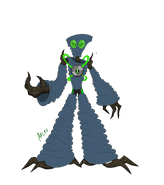 The planet of Vaculation was once known for being a baren, dry desert planet with never ending windstorms and tornadoes. It is also said an array of fossils and signs of an ancient civilization can be found as well. Despite Vaculation being a very hard planet for life other than Whisksalosians to thrive on due to the horrid wind storms, it's actually a very important planet in many galaxies due to how much electricity it can produce from all the wireless Cerebrocrustacean made windmills. Vaculation can work as a battery that several planets that do not have good energy sources can use, this has led to many of the Whisksalosians being very skilled electricians and engineers for level 8 planets.