XLR8 is the Omnitrix's DNA sample of a Kineceleran from the planet Kinet in 5 Years Later.

XLR8 has a velociraptor humanoid body. He has blue skin and black markings around his body and eyes. XLR8 has a tail that is striped in white and black. He has three claw-like fingers and ball-shaped feet. He wears a black, green, and white bodysuit. He has a visor that he can flip down when running to avoid getting bugs and debris in his eyes. 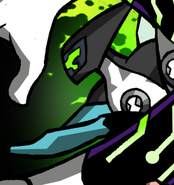 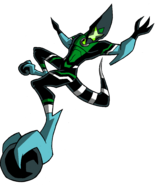